I’m definitely stuck in summer mode.  I keep saying to myself “this summer, I’m going to ____________________”, as if it weren’t already September, the grands weren’t all back in school and the fall activities weren’t gearing up and the summer activities weren’t winding down.  Admittedly, it seemed that this particular summer was more hectic than usual with family togetherness, minor injuries (mostly mine) with my back reminding me off and on that I’m not as young as I used to be (really??). Ahhh, no real complaints here, just the impossibility of trying to fit a year’s worth of being together and a year’s worth of activities into a six to eight week time frame.  FYI – Half our grandkids and their corresponding parents live in Thailand — Bangkok to be exact and can make a trip back to the U.S. once a year, hence the compressed time frame.  The rest of the grands live locally – a good thing for a grandma who needs a grandkid fix every now and then.

Now, aren’t you just dying to see a photo of our little darlings???

Five granddaughters and one grandson!

l-r: Harper, Emma, Shepherd, Charlee, Annabelle and Susannah, the one who started it all!

I’m working on a series of small bottles that I’m enjoying a lot.  I have no plan when I sit down to throw, I just let my hands do their own thing.

These are ready for their first firing in the next few days,

ON THE FIBER FRONT

These are some singles I spun up.  I don’t feel like they are  crying out to be plied so aftere a nice wash and wind, I think they’ll make nice socks for someone!

The best way to pay for a lovely moment is to enjoy it. Richard Bach

I leave for home the day after tomorrow, always a bittersweet anticipation.  A bit sad to be leaving, knowing that I won’t see my Bangkok babies until December, leaving part of my heart in Thailand but at the same time, looking forward to being home and reconnecting with the other part of my heart that I left at home when I left for Bangkok.  I pray that someday we’ll all at least be on the same continent, if not the same state or town.  Until that happens, I’ll use all that airplane time (16+ hours!) to get in some serious knitting time on whatever project I have going at that time.

This extra knitting time is a good thing this trip, a really good thing…….

I finally took a look at the Leksak Lady pattern, rows and rows of stockinette as a general rule don’t require much in the way of pattern watching.  Talk about a Debbie Downer moment!  I’d had it in my head that the pattern read “continue working in stockinette until the garment from the shoulder measures approximately 20 inches”. instead,  it reads “continue working……………………….measures approximately 28.5 inches”.  My Leksak Lady measures about 18 inches from the shoulder at the moment.  I don’t think I can fudge 10 inches of stockinette.  😫😫😫

Instead of a project photo, something to make you smile –

OK, at 63 (!) I’ve been been trying on a few different personas, just one more sign of my decision to never grow up, but here I am once more, an amalgamation of several whos and whats, as reflected in my new title, Mud and String.

As I type this, I’m en route to Bangkok, Thailand again, accompanying Big Mommy and the three grands, the Papoose, the Sprout and the Peach. All growing up so so fast and leaving me in the dust regarding what’s cool and what’s not. Anyhow……..

This trip has been very crazy, beginning with the first leg of the 30 hour trip being delayed an hour in Little Rock due to weather in Dallas, setting off a chain of situations like dominos falling. First, we missed our connecting flight to Hong Kong and so were stranded in Dallas for 24 hours, waiting for the next plane to Hong Kong. An adventure unto itself…More on that later.

We made it to Hong Kong! Here’s the view from our gate waiting area-

Before I close this out, a few pics of recent projects

Here I am, attempting to jumpstart what used to be so easy, the habit of knocking out a blog post a couple of times a week and following the blogs I particularly enjoy, of which there are many – keeping up with what others are reading or knitting, baking or making music and/or just what’s going on outside the realm of Casa Coleman. I don’t know if you’ve missed me, but I’ve missed you and it feels good to be back.❤️

The newest grand — then and now:

and we can’t forget big sisters…

OK everyone! It’s time to stop growing and changing – at least for a little while – I’m not finished loving this stage yet!

Now for the Bangkok branch update:

As you can see, they too are growing and changing much, much more quickly than I want!

NEXT INSTALLMENT – Knitting and throwing, ringing and reading and whatever else catches my fancy!

Whoever is happy will make others happy too. Anne Frank

Yeah, the little clock at the top of my screen says 4:24 am and I’m up, sitting at my kitchen table, drinking coffee out of my favorite cup, the one which says “Some days I am a princess, some days I am a warrior (choose wisely).  I think I’m a warrior, probably a very tired one later today.

Thank you my sister of the heart, CeCe for the awesome mug!

FYI – I had a birthday last week

Cece also gifted me a 12x magnifying mirror, which I love btw, I guess she got tired of listening to me fuss about how I can’t see much of anything close up, making any eyebrow maintenance nearly impossible.

making me wish for spring to hurry on up and get here!  Today’s Bangkok countdown: 25 days until departure!  Mr. Iknead and I are getting antsy…….we’re ready to be be there!!!

Oops!  Almost forgot this.  I want to recommend a book that I just read, The Year of Less, by Caitlin Flanders.

In her late twenties, Cait Flanders found herself stuck in the consumerism cycle that grips so many of us: earn more, buy more, want more, rinse, repeat. Even after she worked her way out of nearly $30,000 of consumer debt, her old habits took hold again. When she realized that nothing she was doing or buying was making her happy—only keeping her from meeting her goals—she decided to set herself a challenge: she would not shop for an entire year.

The Year of Less documents Cait’s life for twelve months during which she bought only consumables: groceries, toiletries, gas for her car. Along the way, she challenged herself to consume less of many other things besides shopping. She decluttered her apartment and got rid of 70 percent of her belongings; learned how to fix things rather than throw them away; researched the zero waste movement; and completed a television ban. At every stage, she learned that the less she consumed, the more fulfilled she felt.

I find that the older I get, the less is more concept is becoming more and more appealing.

This book is an easy read and provided me with lots of food for thought.  I don’t know if her technique would work as well if she had someone, a spouse or partner, sharing space, but the challenge is intriguing. 🤔

The trick is in what one emphasizes.  We either make ourselves miserable or we make ourselves happy.  The amount of work is the same.  Carlos Castaneda

Tosh Chunky in One of a Kind Nectar

This yarn was much prettier after it was knit up.  The colors seemed sort of, I don’t know, blah, I guess.  I’m so glad I stayed with it to the finish.  I love the soft, subtle colors now!

Mr. Iknead and I are renewing our marriage vows this evening, with our sweet son in law officiating.  It’s very low key, just family, the kids and their spouses and the grands, in front of the fireplace here at home, with dinner afterward. The past 35(!) years hold so much laughter and love, along with some tears, of course, but the love and laughs far outweigh anything else.  So, yeah, I’d do it all again in a heartbeat.  Pictures to follow.

A WORD TO THE WISE

When your paper carrier leaves your paper right on top of your sprinkler system, do not, I repeat, do not attempt to dry it, the paper, not the carrier, in the microwave; or at least, don’t get distracted and walk away.

I didn’t know paper would ignite at around the 20 second mark.  Yeah, my attention span is about that short.  Burned clean through the first section and about halfway through the second, FYI.

Big and busy day today. Mr. Iknead and I spent the morning with all three grands and their moms at the zoo. I don’t know about the others but I’m totally beat. I bet we walked three miles today, easy! We had a blast and except for one tiny episode of COTTON CANDY COTTON CANDY IWANTCOTTONCANDY!!!! everyone’s sunny disposition stayed put. The four newest tiger cubs were a particular favorite. Babydiva developed a short term obsession with mole rats but was eventually distracted and we were able to carry on with our visit. 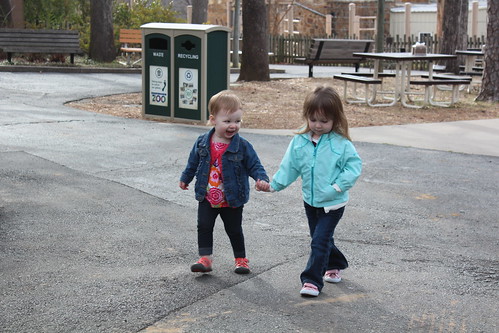 Babydiva and the Papoose – Cousins and BFFs 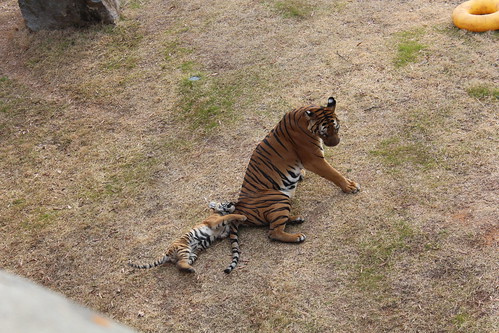 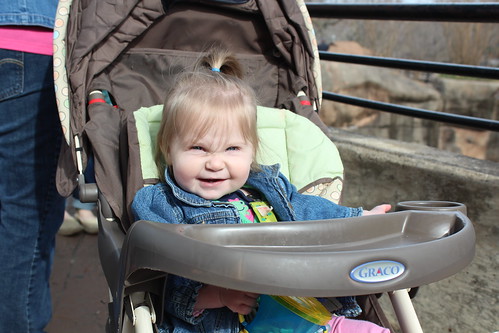 The Sprout’s Pushing ME Next Time!

Mr. Iknead and Babydaddy don’t have a chance.

And you know what?  They love it!  Mr. Iknead melts completely when he around the grands, it’s the sweetest thing – no request refused, no job too large or too small.  Pawpaw’s got this and is loving every blessed minute.  I married a marshmallow and it’s grand! 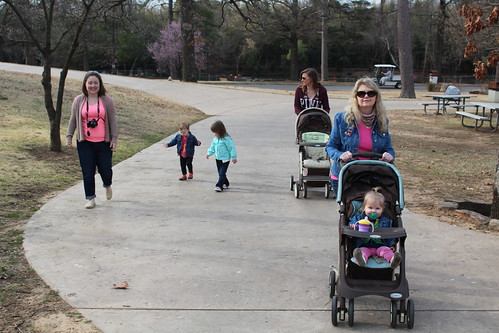 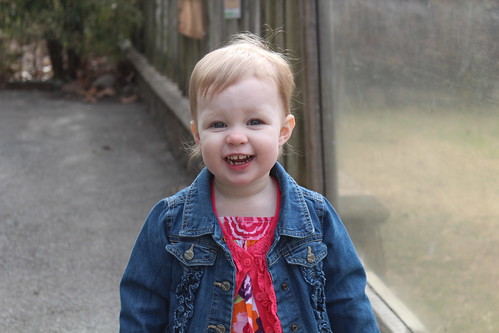 Another wondrous box arrived while we were visiting the zoo and (be still my heart) this was inside:

There were two, count ’em, two hanks of this in the wondrous Yarnbox; the sheen on this stuff is phenomenal, as you can see from the photo.  Now the hard part – picking a project because, as we all know, fabulous yarn calls for a fabulous pattern.  Shawl?  Shrug? Sweater? Who knows?  Most of the time, in my plane of existence, the yarn decides what it wants to be, then it’s my job to figure out what that is.  I’m thinking some type of wrap, maybe something with a hood?

Meet Forrester Gump, the newest member of the Iknead family.

Mr. Iknead has been so patient, waiting until he found just want he wanted, from the sort of silvery green paint job, to the moonroof, to the automatic back hatch – just touch a button and it opens and closes *snap fingers* just like that.  I’m happy to see him so happy and excited.  He deserves this new ride, he’s been driving my dad’s car for the past couple of years, a good car, a Buick LaCrosse, nice, not too fancy, but really, not his style.  He’s more of an SUV kind of guy.  I don’t mind telling that I’m a million times blessed to have him as the love of my life.

It is better to travel, than to arrive.  Buddha

YOUR EMPOWERMENT COACH TRANSFORMING YOU TO YOUR AUTHENTIC HIGHEST SELF!

Did You Make That?

Leading UK sewing blog where we believe creativity is contagious