I hope everyone had as wonderful a Thanksgiving as the Iknead crew did.  As it happens every year, I overate, overplayed with the grands, overtalked and just all around over busied and basked in the company of loved ones.  I finished the Scapula scarf (yay!) and worked on Christmas knitting when I wasn’t overdoing whatever it was that I was overdoing at that moment.

Did you know that Stuttgart, Arkansas (home of the Papoose and Sprout) is the Duck and Rice Capital of the World?  Did you know that the World Championship Duck Calling Contest coincided with Thanksgiving this year?  I didn’t think so.  There were so many duck callers around that I expected every duck on the planet to swoop down and pay us a visit, but fortunately, that didn’t happen.  There was, however, the obligatory person in a duck suit.

The grands had matching PJs –

Babydiva, the Papoose and the Sprout

The Sprout showed off her two new teeth –

Babydaddy and Babymama announced that Babydiva will be a big sister next year!  That’s right – we’ll be welcoming a new grand around July, 2014 and we couldn’t be more excited!  Let the baby knitting begin!

Life is the art of drawing without an eraser.  John Gardner

On a whim this morning, I stopped in at TJ Maxx , mostly because I’m looking for a sort of duffle/overnight/weekender bag that doesn’t scream ugly gym bag when I carry it.  I’ve justified needing one because I’m keeping the road hot between my house in Little Rock and the grands’ house in Stuttgart.  I want something at least a little girly and just big enough for a couple of clothes changes and my bathroom/makeup gear.  Of course, since I have champagne taste on a beer budget, my ideal bag probably doesn’t exist but I’m going to keep looking.

Making the circuit at TJM, I found the toy department (I didn’t know they had toys) and scored some awesome good deals.  I think the most expensive one was a Leap Frog Xylophone for $11.00 that I can picture the grands banging on even as I  blog.  I checked and yes, it does have an off button.  The grands are coming for a visit this weekend, I can’t wait to show them the new stuff!  Check it out –

OK, I might be the only person on the planet who thinks this is so great.  Mr. Iknead finally figured out how to use the wireless thingy on our printer.  “Why are you so excited?”, you might ask.  I’m excited because I can now print patterns and what ever else my little heart desires FROM THE COMFORT OF MY CHAIR IN THE DEN, IN FRONT OF THE FIRE, WITH MY KNITTING!  Now if I could just figure out how to get the copies without moving out of my chair, life would be pretty close to perfect.  I think I need to buy more printer paper.  As Martha would say, “It’s a good thing”.

Strong people make as many mistakes as weak people.  Difference is that strong people admit their mistakes, laugh at them, learn from them.  That is how they become strong.  Richard Needham

watching Finding Nemo with the Papoose, drinking a cup of fancy coffee, while it’s so cold out that I don’t even feel guilty for not taking a walk. Just in case you’re curious, it’s 27 degrees F and sleeting here in the duck and rice capitol of the world. Stuttgart, Arkansas for the still curious. Babysis is sleeping in her swing and has been for the last hour or so, Bigmommy is taking advantage of my extra pair of hands and is taking a well deserved nap and as I already mentioned, the Papoose and I are watching Finding Nemo and sharing a piece of cake. Does it get better than this? Not in my world or probably yours either.

Annabelle aka Babysis was baptized yesterday and charmed Rev. Arnold by grinning at him the whole time. Needless to say, he joined the rest of us who are under her spell. She wore the family christening gown and by my count is #5. The first being her mommy, Lindsey aka Bigmommy.

Before church, hanging out with Papa aka Mr. Iknead 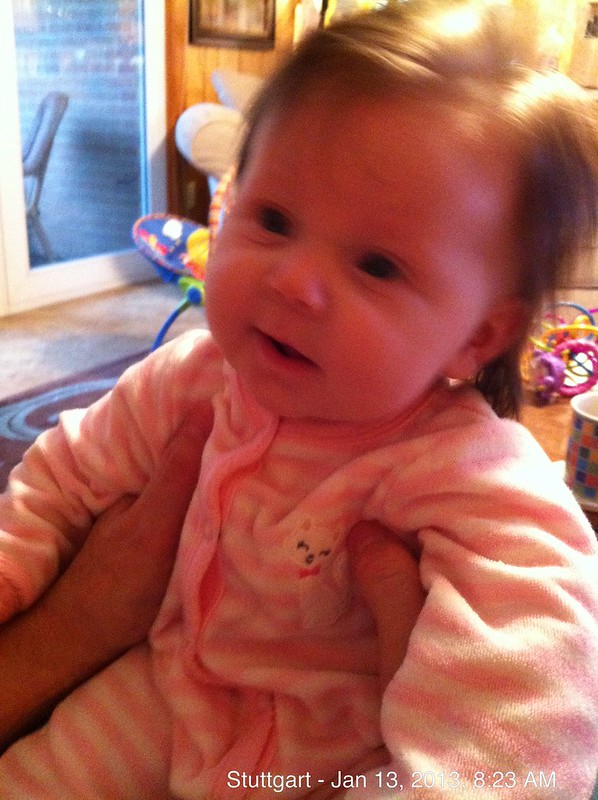 Our trip to Stuttgart aka the Duck and Rice Capitol of the World to check out the Papoose’s new digs was amazing.  The parsonage was really nice, if a little dated, with big rooms and a great backyard, the Papoose is really loving it, lots of running room.  It’s right across the street from the church, so they can just walk over.  The congregation was very welcoming and warm and put on an awesome potluck after church.  I suppose I should mention that the church I’m going on about is Grand Avenue United Methodist, in Stuttgart, Arkansas and my best son in law, Clefton Vaughan, is the new pastor.

Susannah Grace aka the Papoose

Babydiva aka Harper with her Uncle Clefton

As usual, when we all get together (forgot to mention that Babydiva and her entourage was also there), a good time was had by all, with everyone talking at the same time, someone looking for a snack most of the time and, of course, paying homage to the Papoose and Babydiva, the prettiest and smartest girls ever.

It was hot so Mr. Iknead and the Papoose took a dip in the pool, where the Papoose made sure that her Papa was well watered, pouring water over his head from a watering can.  Cutest thing ever!

I don’t really want to talk about it, it’s painful you know, but I frogged back about four inches of heel flap and sock leg on the 9 to 5s.  I still haven’t a clue where the wheels came off, I looked and looked, and counted and counted, never figured it out.  Fresh start on the heel flap tonight after work.  Frustration doesn’t look good on me, so I hope to get it straightened out so I can move on.

Failure is instructive.  The person who really thinks learns quite as much from his failures as from his successes.  John Dewey